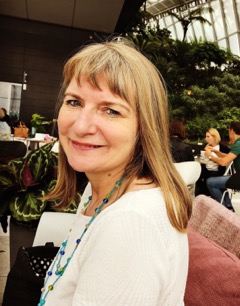 Gail Aldwin is a prize-winning writer of short fiction and poetry. She also enjoys success in co-writing plays and the short play Killer Ladybugs was included in a 2017 production by Cast Iron Theatre, Brighton. Other writing interests are screenwriting and novel writing. The String Games, Gail’s recent novel helped to secure her a PhD in creative writing with the University of South Wales. In December 2017, Gail took up a writing residency at Brisons Veor, St Just, Cornwall where she began work on a new novel and honed a number of poems.

As Chair of the Dorset Writers’ Network, Gail enjoys supporting writers across the county. In 2013, she co-facilitated the Pen Pals Project which delivered workshops to people with dementia and their carers. Alongside other creative writing practitioners, Gail attended professional development training on workshop facilitation as part of the Bournemouth and Poole Lit-Up project. In 2015, she contributed to a celebration of creative writing in Poole by hosting a workshop and organising the first Poole Festival of Words Short Story Slam.

With short stories in two editions of The Best of CaféLit and another in the 2017 anthology Gli-ter-ary, Gail is very pleased that her forthcoming collection of flash fiction is placed with Chapeltown Books. Other print anthologies with Gail’s stories include Flash Fiction Festival One (Ad Hoc Fiction, 2017),What I Remember (EVB Press, 2015), Dorset Voices (Roving Press, 2012), The Last Word (Unbound Press, 2012). Her work can be found online at Ink Sweat & Tears, and Slamchop.

The Writer is a Lonely Hunter: https://gailaldwin.wordpress.com